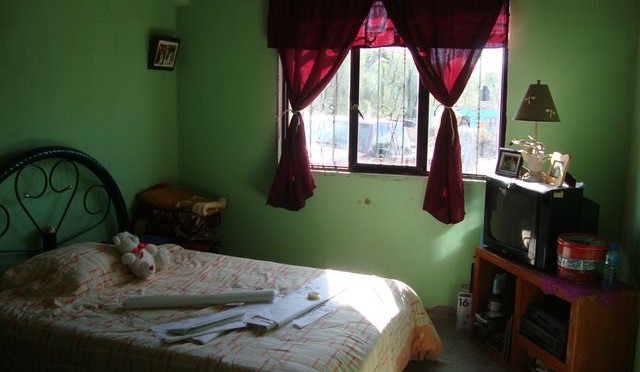 I haven’t blogged in roughly forever, mostly because I never got around to it. But I hope to start keeping a blog regularly from now on. (Maybe voy a practicar español y 中文 too).

Anyway, I spent IAP, Independent Activities Period, a special time during the month of January for MIT students, in a little town in rural central Mexico called La Vaquita (hur hur that literally means “Little Town”) as part of PSC-GPI (Public Service Center and Global Poverty Initiative) Poverty Action Team. This program was new for this year. I found out about it by attending a GPI General Body Meeting, checked it out on the GPI website, and then submitted a short application. A bit later I had an interview at the PSC, and then right before Thanksgiving Break (1 or 2 months later) I found out I’d gotten in.

A little photo overview. I think I’ll post some of the funnier pictures in a followup post. This was the room we stayed in. Yay we had beds! Carla is part of our host family. We’re taking a short hike just outside of town. We are always fed super-well. There were no restaurants so all the food is homemade. We built an awesome ecostove! It’s a program of the government. Two holes for food, one hole for the chimney. Made from local materials and a bag of cement. This was done with a mold.

We’re making a stove without a mold in Señora’s ovenplace! Sam, Sivakami, and I crawled in to help pound the cement mixture. The other kids did too, child labor ftw.
7 Some home food! Found on one of the rare occasions when we left La Vaquita and went to a neighboring town. It was really spicy for fried rice. Yep, there electricity. Most of the streetlamps are broken though, and it’s not very fun walking at night because there’s lots of working dogs that are trained to bite at cows. Oops, when we get locked out of the house we have to climb onto the roof and into the inner courtyard. This open-to-the-air architecture made our room especially freezing because (a) No heating (b) No door to our room, just a curtain. Think 5°C (40°F), probably less since we definitely got ice and frost overnight, freezing. Our host mom. She’s pretty amazing and acts like a person twenty years younger.
Next to her are Bobby and Marado (I think that’s his name, it means brown or something). Doing some laundry! Washing machines, but rinse cycle is by hand. The water comes from a well to one spigot for each house. Then take a hose and fill up the barrels (there’s one to the far left). Use buckets to withdraw water as needed throughout the day.
Do this in the afternoon if you don’t want to freeze your hands off. Hanging up some laundry yo. Don’t want things to fly off into cacti or dirt, and it gets pretty windy some days. Look at us, we’re working! (1) We called a town hall meeting. The paper is for ideas and such. (2) For our last meeting, we split up into groups and then got volunteers to present conclusions. CW from lower left: Sam, Carlos of Zacatecas who came down to help us out, Señor Martín, a prominent figure in La Vaquita, Franchesco, a prominent figure from a neighbouring village, and Francisco, a student at ITESM in Zacatecas who works on his parents’ farm on the weekends.

(3) Lindsey, ITESM employee and director of Study Abroad programs, Sivakami, behind her is Don Jesús, comissario of La Vaquita, and then the rest of the town. Some beautiful scenery. You don’t get this at MIT, we’re in concrete city-land here. Helping out with chores! Not really, we are cow milking novices. There was this sketchy part where the Health Team came to give H1N1 vaccines. The nurse guided us into giving vaccines and I, learning on the job with a questionable grasp of her Spanish, vaccinated maybe 15 people. Including babies. *sadface* Homemade tamales for the win! Delicious, and there was this awesome warm milk (fresh from a cow, no doubt) + cinnamon drink.
Far left is Señorita María. She’s this awesome lady who gives a grandmotherly schoolmaster aura when she talks. To my right is a guy who, like many of the other guys in the town, will leave for cities to find work to support family. There sure aren’t enough jobs in La Vaquita. To the far right is the Promotor of the Health Team, Javier. He truly believes in his job. Carla is to Sam’s left, and then there’s Sivakami.

The doctor of the Health Team. This is the Casa de Salud of a nearby community.
The typewriter is new technology from 2009, before that they wrote documents by hand. Because there were no public trash bins, trash was an issue. It’s really fun picking trash out of cacti… Also, like most rural areas trash was burnt because of lack of pickup programs. Trash pickup day! Then we burned it all. There was still lots of trash left when we ran out of trash bags (they went fast), but it was a good start. We spent 1 day sightseeing in Zacatecas, a large city (largest in the state of Zacatecas) about 3 hours away from La Vaquita by car+bus . We’re crazy workaholics or something, I’m not sure what drove us, but we had tons of fun and I wish we could have stayed longer. Our family owned lots of cows. This is right behind our house. At the convive, a picnic for us just before we left to go back to the States.
There’s a slide in progress there. Did I mention the beautiful scenery?

We spent 3.5 weeks there and had an awesome time. Now we’re documenting all the possible future projects for other MIT students, such as biogas digesters, computer classes, solar heating of homes and water, etc.

Ooh, it’s light outside. And all the snow melted 🙁 So much for a crazy blizzard. Good night!