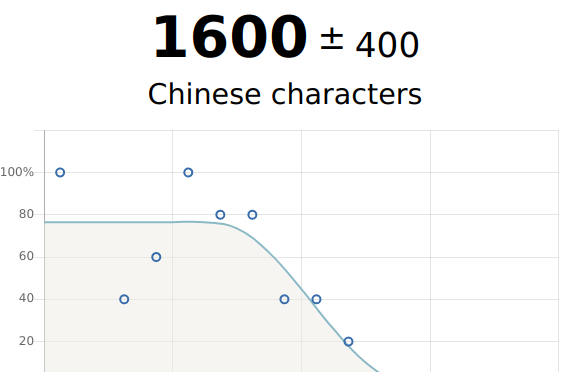 So I’ve been working hard at improving my Chinese while I’m at home and my parents have the patience and skills to help me out on a daily basis. I remember going to visit my relatives in China and not being able to express more than that I was still in grad school and also cared about the economy (or something vague like that). It was really embarrassing, as it forced me to realize how much I relied on the English part of Chinglish with my parents, and made me really wish I could express myself better.
(For context, I’m an ABC – American Born Chinese – and learned Chinese through Saturday school, which was organized by local Chinese parents at a nearby Church that had lent us some space. OMG and they had an ice cream vending machine so tasty).

Anyway, depressingly, I probably only know about 1000-1500 characters :'( I guess the nice goal point would be 5,000 characters… I wonder how many I knew when I took my HSK test like a decade ago. Only one of them attempted to estimate words known (vs characters).

The Chinese at the bottom says “汉语局外人 秩序白银” or Pinyin “Hànyǔ júwàirén zhìxù báiyín) = “Chinese Outsider, Order Silver”. Taking this test was definitely An Experience, highly recommend… they have devilish multiple choice questions like, given four (handwritten) characters, “which of these is NOT a real character” 0:

Back to WordSwing’s character test, if you click on “stats”:

If you use “Dong Chinese” it will also track for you progress on characters read / writing.

Pleco Screen Reader + NYTimes Chinese is a great combination!!
(Note: I did pay for Pleco so I’m not sure if this “Screen Reader” tool is a default free feature)

Anki has been eating like an hour a day to go over my cards (this is because I’m learning writing, so I have to physically write out the word!), + 3-4 hours once a week to pick out my mispelled words, add pinyin, and create cards… Finally today I got around to adjusting settings. This is unsustainable – I want closer to 20 mins a day (so 15 mins by the estimated time).

So to 1/3 the time (45 -> 15 mins), I need closer to 30 review cards. I’ll be conservative for now and put it to 20 reviews. Save some time that I lost from all this over the next few days (probably use it all on making cards lol, but hopefully this will be more long-term manageable and I can spend more time on stuff I enjoy like reading).

Was supposed to be daily, but really lost it over the last week (due to elections / volunteering for the elections). I have not been putting them online because some of it might be kind of private / boring.

It has been my dream to read a full Chinese novel. Although this seems unlikely anytime soon, I did find a copy of MDZS which is the novel version of a TV drama I watched (and also read the wiki for). (Note: It’s immensely popular ‘cos the guys are cute, and there’s a lot of behind-the-scenes content to fan over, but to be honest the plot is questionable). Having watched the drama makes it SO much easier to follow what is going on, since I’ve had 50 hours to have the character names drilled into my heads (each of the 30 characters has 3 different names or something…).

I also switched fonts on Ubuntu to use the UKai font. And also installed SunPinYin IME which is soooo much better than whatever Ubuntu IME I was using before (sudo apt install ibus-sunpinyin, I think). It has a much better “autocomplete” which is critical for typing Chinese — before, the IME was so bad, that it was faster for me to type Chinese on my phone!!

I’ve started occasionally toggling my cellphone to be in full Chinese for the settings. I also set my Switch (which I got recently — story for another time) game to be in Chinese settings.

Google Lens helps a lot with that. I can point my cellphone at the screen, take a picture, and copy the text out using google lens. Then put it into pleco. Much faster than writing it all out.

I’ve still not found a good Chinese podcast that hits my interest points. So far I just occasionally listen to a radio broadcast of news from some city in New Zealand, Waikato Chinese Voices.

I definitely have more patience for reading Chinese – I can get through a paragraph or two of a newspaper article by myself, and the whole article with Pleco helping. But it would to be able to quantify that, or have a goal to work towards. (like … learning 5000 characters, but I am apparently so far from that, that I don’t know that I will be motivated to just brute force learn characters). I just can’t help but feel some more targeted learning would help me progress faster. But for now, I’m just happy I’ve been able to be fairly consistent about actively learning Chinese for over a month now.

Whew this blog post turned out WAY longer and took way more time than I anticipated. Happy 2021 everyone!

IIRC the anki defaults seem to be geared more for short term, dense studying (like for tests). In those situations you would want a lapse to reset the interval to 0.
For longer term learning, you ideally want an 80-90% recall rate.