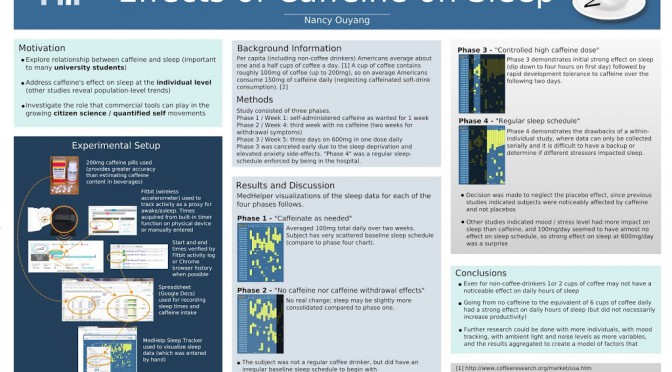 Finished my draft poster for 2.671 Measurement and Instrumentation (required communications course for MechE undergrads). Basically, we are given free reign to design and collect data from our own experiment, and we have to present in a Poster Session at the end of the semester (I present next Thursday).

Well, I’m abysmally behind in this class but catching up, and I made this fluffy poster Thursday night – Friday morning. (Fluffy, as in not much content and no math). What follows is an overview of the tools I used, and at the end my poster / my Inkscape svg source file.

My Inkscape file is based on the wonderful Inkscape template I found online. I found it aesthetically pleasing compared to the default 2.671 template. (If you search for “2.671” on Google you’ll find some posters other classmates made using the default template).

Actually here’s Eli’s poster, which shows the default powerpoint template scheme if not the exact template:

Data was manually entered. See poster below for what weeks correspond to what levels of caffeine.

My sleep tracker on Fitbit: http://www.fitbit.com/user/22J93R/sleep
What a fitbit looks like:

See Actigraphy to understand why I can wear my fitbit on my non-dominant hand during sleep and get a rough idea of my sleep quality (how many times I almost woke up / was in light sleep mode).

Finally, I made a poster in the wonderful open-source free program Inkscape. More importantly, I used a template I found online.

I also used kuler to pick a color scheme and writer to help me write what I wanted to put on the poster, esp. since Inkscape started responding really slowly to my typing text so it was much faster to type it elsewhere and ctrl-c ctrl-v into the Inkscape text box. And GIMP to clean images I’d found online (two for fitbit) and I found the coffee cup on openclipart . The images sources aren’t cited yet, I had a crunch deadline for the draft poster and just turned it in anyway.

Here’s a preview of  my draft poster (and a perhaps helpful flowchart of things): entirely based on the example poster I found online. Thanks a bunch to airlich.

And a WIP picture of what the template looks like inside Inkscape:

for reference, my research braindump from earlier in the semester:
http://nouyang.blogspot.com/2012/04/tools-for-scientific-posters-braindump.html

And then some current research on getting “raw data from fitbit”
http://blog.brianhouse.net/post/6877602920/an-activity-heatmap-from-fitbit-data

However, prior to the release of the Fitbit API, the developer Eric Blue published a hack in perl that scrapes data from your Fitbit profile page — turns out that the Flash charts they display are powered by an XML feed with significantly more resolution than what is offered via the API. Based on this discovery, I wrote a python script that pulls the granular data.

which isn’t terribly useful to me. So yay more chances to practice coding skills. =^__^=