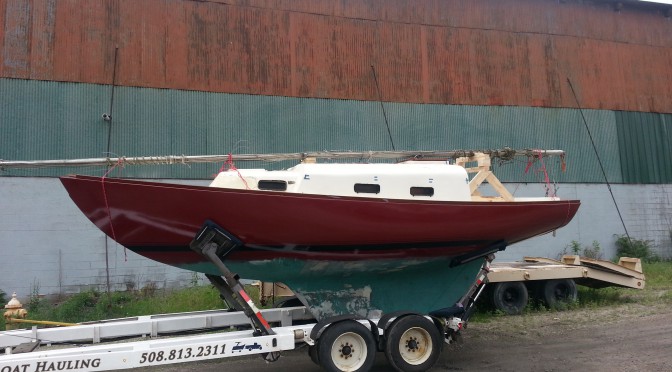 A few months ago Cappie (co-founder of NarwhalEdu) and I bought a boat off  craigslist for a very small amount of money and have since been working on attaching pieces and getting her shipshape again.

We actually could have gotten her in the water much sooner if it weren’t for several mishaps with the registration and titling office until finally we got on the phone with the right person.

Here’s a summary of our trials and tribulations with the boat. I’ve been keeping it under wraps (har har… it has actually been under a tarp for weeks now), but over the last few months have gently broken the news to my parents that I will be living on this boat. So now I’m free to blog about it! Cappie found the boat on craiglist in February while looking for a dinghy. It was listed for $500. Wow! What was up with that — a 26 foot boat for that much? Was it falling into pieces? After some conversations back and forth that went roughly like this:

Cappie: So, how do you feel about twenty-six foot boat.

Nancy: …wait, are we actually serious about this?

we decided to investigate right away. We weren’t sure why someone would sell it for this price. Cappie theorized that maybe some older guy just wanted the boat to be in good hands with some youngsters. I was very skeptical of this, but it turned out to be the case!

We got some input from our friends who said things like:

“Boat stands for Bring Out Another Thousand” and “The happiest days of a boat owner’s life are the day she buys the boat and the day she sells it.” One person said simply “Don’t do it” and refused to talk to us further. Well. One thing everyone agreed on was that the woodwork inside was beautiful. The owner at the time was a carpenter and had spent many years working on this boat.

After some consideration we decided to go for it. The money would only be $100 up-front and we could at any stage decide to abandon the project.

On the bureaucracy side, mostly we just got really angry and frustrated because it sounded like they wanted us to pay 20 years of excise taxes on a boat that was never used. As recent college graduates working on startup, a few hundred dollars is a significant chunk of change.

At that point, we needed to move the boat out of the Worcester warehouse it was stored in since the warehouse was scheduled to be torn down.

We asked around and finally learned that marinas in Boston all wanted insurance, which we couldn’t get without a hull ID number, which we didn’t have because our boat was so old. However, we found a marina that was kind enough to put us up. We found them through a trailering service they advertised on their website. Turns out, they drove all the way down only to learn that their trailer was too big to fit inside the warehouse between the warehouse pillars! Sad. But they were able to recommend to us someone else who had a smaller trailer.  And man, seeing the hydraulic lifters in action was pretty sweet (the big trailer even had wireless controls for one), as well as just how awesome the drivers were at driving geometry and precise maneuvers, and seeing the drivers confidently pull out the stands and “jenga” out the blocks was impressive. Well, $500 later (and a bunch of effort securing the mast down and bringing it on top of the boat) the boat was in Fairhaven. We wrapped it up in a tarp and left it there.

A few weeks later, we return to find a flood inside… we hadn’t noticed because after it rained it would dry out and drip out over a few days. The beautiful woodwork warped even. We puzzled over what was going on and where the water was coming from for a while, before realizing that there were several holes we didn’t tape over in the bow and also there was a valve that we hadn’t opened to let all the rainwater coming in through the deck drains out. DERP. It actually poured out water for several minutes like that and formed a small lake.

Next update: Janky watt-hour testers for boat batteries, honeycomb nest discovery, HIN dremeling, EPO inspection and detective work (what is the boat actually?), registration and titling issues, troubleshooting an old outboard motor, and attaching the gunnels and trim, costs of living in a marina (liveaboard) vs paying rent.