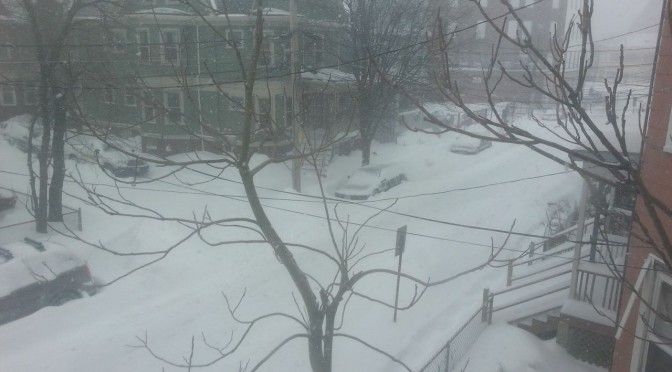 Here in Boston, it didn’t snow at all the last few months, and then suddenly it snowed a lot (90” over the last 30 days).

Here are some sweet graphs from http://weather.ou.edu/~splillo/misc.html

On the plus side, I’ve now met my neighbors (since they’re outside shoveling for hours). At this point, we just throw the snow up as high as we can onto piles of snow. There’s nowhere to shovel to snow to…

I’ve also made new friends and spent quality time with my roommates. We all co-work, since everyone is working from home because our city cannot handle the snow. * * I come from Georgia. My Boston friends were laughing last year about Atlanta shutting down due to a few inches of snow. WHO’S LAUGHING NOW HUH? 😛 My Alaskan friends tell me our Boston snowfall is normal for them, but their cities are built to handle it.

Here is a large icicle. It later fell and broke the railing/steps on our side-access porch. o__o Apparently, falling icicles do kill people. I’m glad no one died from our icicles.

Here are some more pictures of my poor bike. <3 bike, I will spend $$ and give you a professional tune-up after winter is over. Biking in boston is a struggle right now. The major streets are passable, but all the bike racks are very buried. For instance, at wework south station, they admonished me for locking to the railing I didn’t need to step in chest-high snow to reach. To add insult to injury, when I got out of work the railing was blocked anyway by trash bags. :/

Here is my bike after the valentine’s weekend snowstorm. i left it overnight on top of a snowpile in order to lock it to something. When I left, I had a “where did I lock up?” moment. It was well-camouflaged. here are some pictures from my friends

our mayor is flummoxed

Walsh: “I don’t know what to say to anybody anymore. Hopefully it will stop eventually”

“NEXT CHANCE OF WARMTH: SOMETIME SPRING INTO SUMMER:

(i wonder why they have ellipses… AND ALL CAPS… is it for maritime radio, which I’ve now spent hours listening to … for their text-to-speech synthesizer… trivia, maritime radio weather reports have three voices since 2002… here are some voice samples via NOAA “Voice Improvement Processor” … listening to it brings up salty memories for me)

Note: I dug out some of this from https://twitter.com/hashtag/BOSnow

highway signs with a boston accent

build a snow igloo, then rent it out on airbnb? PSA: Be careful. Turns out collapsing snow caves can kill you by asphyxiation. This happens when snow plows don’t realize it’s a snow cave instead of a snow bank and dump tons of snow on top of your cave. Then you die. So make sure to stick a flag with a picture of a human on top of your snow cave, and don’t make it on the side of the street.

predicting the future is hard. here are some good websites to help you

wunderground.com (great UI, graphs temperature forecast for you and you can hover over it for instance to check out the likelihood it will be raining at 1pm on Tuesday) weatherishappening.com (if you like a dose of snarky with your forecast)

here is a narwhal on a narwhal

to end on a happier note, here is some cuteness for you