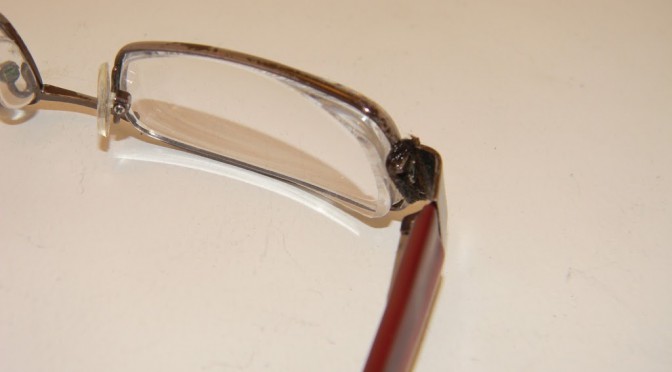 earlier I posted about broken eyeglass frames (and was investigating TIG welding titanium).
they are fixed now, yay! courtesy of nick, some [edit 4/1/13 actually it is brown cotton thread], and some superglue (yay composites)
the secret is I actually have broken two pairs of glasses this term. @__@ these broke…well were the tiny screws are normally the excellent thing about this is that it’s barely visible from the front.

i still intend to fix the other frame, but now it’s super low on the priority list so…

musings:
you know, I think I have a more hesitant attitude toward the word startup (at least, as applied to my own project) than even general MITERS. I can’t figure it out, except that for some reason I want to prove that I am being semi-realistic and not embellishing. It’s not so much an allergic reaction to the idea of people working on something they have a crazy vision about as a hesitancy, especially after my experience with the concept to company IAP accelerator by startlabs, to label myself as working on a startup until I’ve reached some degree of success.