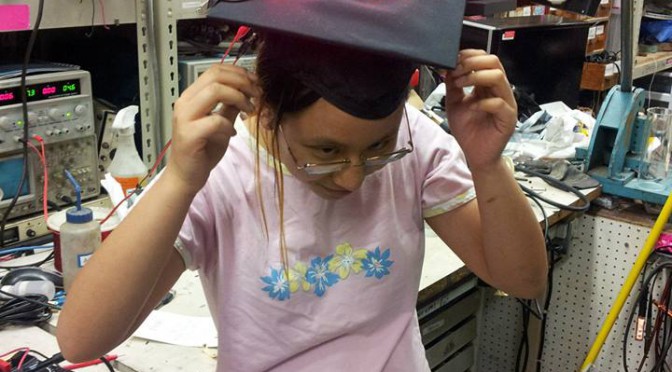 I present here my derpy graduation cap, based off of http://learn.adafruit.com/rgb-led-strips/overview:

Here it is, just finished at MITERS and still tethered to a power supply. Later I electrical taped on a lipo battery,  I kid you not.

From the front it looks normal, which is unfortunate for the graduation video, but whatever, I tried. Only if you get some height above me can you see the lights. The original plan was to have a spinning RGB POV display, ala the plenitude of persistence of vision clock displays out there.

I even milled out a board for it, based on the fabduino files. I can upload the eagle files if anyone wants, but since I haven’t gotten it to work and I can’t be sure there’s nothing wrong with the circuit I don’t want to put the effort into putting it up. This was my first exploration of the autoroute tool, which seemed to work pretty well.

Anyway after pulling two almost-all-nighters working on that project, I gave up when I couldn’t get the arduino bootloader burned onto the atmega (couldn’t get it to program at all, actually — hit a Target not found error). The cap I actually ended wearing was very simple to make and took about 6 hours total, including time spent trying to waterproof it with hot glue and saran wrap. (Most of the letters are stuck on there with the original backing tape that came on the strip). I didn’t have black wires so I used thick brown but still single core wire. I also probably should have done a 6 LED strip for the “I” and just covered up the center portion with electrical tape. Instead, I just skipped the dot on top of the “i”.

I also found this tool supppeerr useful, way more useful than the helping hands, for holding thick and relatively unyielding wires together so that I could solder them:

If you look carefully there are also two burn marks on my cap. I just colored the cardboard underneath with sharpie.

I also would have taken off my cap and showed it to the camera as I was coming down the ramp after getting my diploma if I knew how graduation worked.

I should have sanded down all the wires because I think a lot of the joints were cold solder joints (this bit me when I was repositioning the letters), but it worked okay and is probably the most robust of all the projects I’ve done so far because the circuit is encased in hot glue. Sorry arduino mini! (I potted that into the breadboard). The circuit itself is super straightforward, 3 FETs directly driven by the arduino. See http://learn.adafruit.com/rgb-led-strips/overview.

Graduation itself was simply wet and miserable. I was on-and-off shivering by midway through and the list of names seemed endless. I’m sure they were rushing toward the end.

Ultimate lesson learned: Make your traces at least 16 mil, 12 mil does not work!

The fabduino I will be running (a waste to use it for just 7 LEDs, but I don’t have the time to deal with not just reusing other people’s POV code)
http://fab.cba.mit.edu/content/projects/fabkit/
How to use the roland modela mill
http://fab.cba.mit.edu/classes/MIT/863.09/people/hannah/modela.html
Eagle libraries
http://www.ladyada.net/library/pcb/eaglelibrary.html
https://github.com/adafruit/Adafruit-Eagle-Library
http://fab.cba.mit.edu/content/processes/PCB/fab.lbr
https://github.com/sparkfun/SparkFun-Eagle-Libraries
http://www.cadsoftusa.com/download-eagle/?language=en
modela@ubuntu:~/Documents/nouyang$ sh eagle-lin-6.4.0.run
1/tmp/eagle-setup.4298/eagle-6.4.0/bin/eagle: error while loading shared libraries: libssl.so.1.0.0: cannot open shared object file: No such file or directory
ugh, let’s try troubleshooting this
http://www.kaibader.de/running-eagle-cad-6-2-on-ubuntu-12-04/
http://stackoverflow.com/questions/3153114/how-do-i-install-and-build-against-openssl-1-0-0-on-ubuntu
sudo apt-get install libssl-dev
http://askubuntu.com/questions/37159/is-my-processor-64-or-32-bit
modela@ubuntu:~/Documents/nouyang$ lscpu
Architecture:          x86_64
CPU op-mode(s):        32-bit, 64-bit
http://stackoverflow.com/questions/3153114/how-do-i-install-and-build-against-openssl-1-0-0-on-ubuntu
Uhmm… okay nope. Switching back to a windows computer. A shame. : / I really ought to switch over to something more happy running on ubuntu someday.

How to create board outline in eagle:
http://www.electro-tech-online.com/general-electronics-chat/31558-problem-cad-eagle-how-draw-board-space.html

Hmmm eagle files for this vreg
https://www.sparkfun.com/products/595
gnd out in, so pin assignments are wrong, should be easy fix
https://github.com/sparkfun/SparkFun-Eagle-Libraries
https://github.com/sparkfun/SparkFun-Eagle-Libraries/blob/master/SparkFun-PowerIC.lbr
MAke sure to download zip file! OTherwise file does not download properly (adds some html comments at the beginning)
Currently the Vreg-LM1117 package is
1 ADJ
3 IN
2 OUT
4 OUT@1
which matches the datasheet https://www.sparkfun.com/datasheets/Components/FAN1117A.pdf 1:GND, 2:OUT, 3:IN.

then export as a png (file — export — image)
settings should be MONOCHROME and 500 DPI – this will export a image with white traces.
Make sure the color mode is set to greyscale: image > mode > greyscale
then export Dimenson layer for milling the outside of the board
Remember: the Modela cuts out the DARK and leaves white!

Correction! It should be both the top and pads layer.

must run as sudo
~$ sudo fab