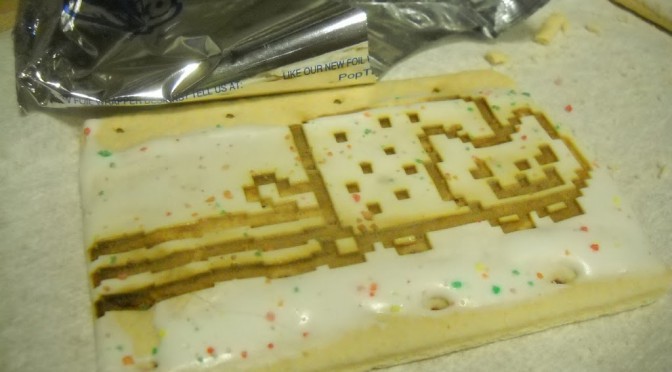 There’s something about watching the media lab lasercutter etch nyancat onto a strawberry poptart that is soul-deep satisfying. Surely now the quality of my education is irrefutably worth my tuition…

The most difficult part of this turns out to be not eating the poptarts long enough to make it from the grocery store to the lasercutter. I’ve wanted to do this for weeks, ever since I saw the Louisville hackerspace posting: http://www.lvl1.org/2011/07/15/new-laser-cutter/, but never made it to the lasercutter until last night. (and I’d never even eaten poptarts before the first time I bought poptarts with the intention of lasercutting them, hah).

So, first things first, go to google images and find an image to trace (I used: http://thelemurblog.com/gallery/Nyan%20Cat.png). I tried to do my grid + draw lines method that I used with solidworks, now in GIMP, but ended up simply using select-by-color + bucket-fill-entire-selection.

Then, play around with the lasercutter settings. This is what I found to work (sorry for the terrible formatting): I stuck it in Coreldraw on a 32×18” bed to make sure it was placed correctly, then thanks to the Windows printer drivers, I simply hit Ctrl-P, set the settings, and printed it. Verdict: Still pretty tasty. The burnt ones tastes burnt, but both don’t taste as bad as the lasercut sugar cookies.

I wonder how it made its way there o.o?? I only posted it on facebook (this blog post was after the fact), so it’s a little creepy.

FAQ
People wondering how they can make one of their own–
http://fslaser.com/40w-deluxe-hobby-laser-engraver-and-cutter
$2.5 to 3k 40W CO2 laser may be your best bet for cheap. It comes with caveats, though, see: http://hackaday.com/2011/04/14/buying-a-laser-cutter-from-china/ and other reviews online.
Probably a better idea to instead look at the list of hacker/makerspaces and contact your nearest one to see if they have a lasercutter you can use. http://hackerspaces.org/wiki/List_of_Hacker_Spaces
Alternatively, cut a stencil out of aluminum foil and blowtorch-singe or stovetop-pan-singe the appropriate parts. Although this tends to make a melty mess and I’m not sure how you would cut a stencil for a shape like this — I guess connect some areas with thin bridges like they do for stenciled letters.
Although probably not recommended depending on what else was cut in the lasercutter, the resultant poptart is safe to eat — it’s the equivalent of a poptart which was super-toasted in some areas (all the laser is doing is dumping heat into some parts of the poptart, it’s not dumping radiation or anything).
In fact, I stuck it in my hall’s free-food table and both nyantarts were gone in an hour. 🙂

Other nyancat shenanigans in the last month of two: (e.g. cutting it out of aluminum, making a mold for it): http://www.orangenarwhals.com/search/label/nyancat

Todo
Next up: embed one of these suckers into the poptart and have it sing too!

Then, after that, make a pressfit cookie nyancar. 🙂 Like this, but with gingerbread (this is done in masonite) and with a nyancat center: