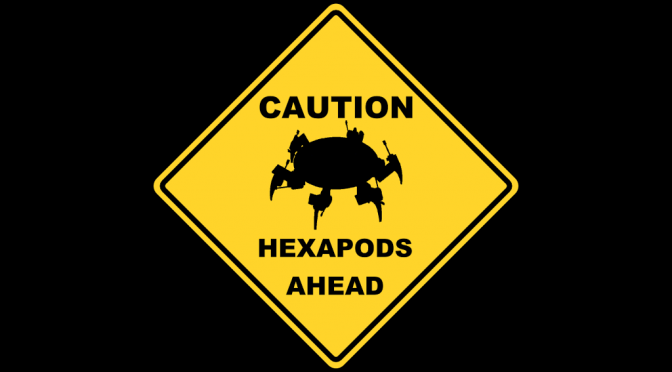 This past week I finally got started on my crazy half-formed ideas about an MITx version of 2.007.

OKAY EVERYONE.
I’m still alive! I lolfailed at making a comic over IAP, but that is okay. Because! I ramped back up into happy excited mode! I hope this lasts more than 24 hours. I’m stressed about The Future but what the heck I am now able to convince myself to enjoy the moment and not be all “I should have done this by now” and “f***there’s a million things I should do, maybe i should just sleep instead.”

Thanks, brain. *scrunches face* I wonder about saying things like this when I am trying to find a job. oh well!

Anyway, I spent the last few days working on a video about hexapods, ostensibly to help people understand the design process for 2.007. (I made 18-servo-pod for 2.007 instead of participating in the contest). I’d taken part in a documentary-making class before, which used the final cut pro installed on the macs in the New Media Athena Cluster in building 26.

But this was a bit different. For one thing, neither of the two hexapods (linkage and 18 servo) work right now. For another, since it’s a video about the design process, basically I am stuck with whatever media I took 2 years ago. So I have a lot less video and more pictures than might be ideal.

Anyway, turns out video editing software (in my case, final cut pro x) is magical and there’s no need about worrying about timing my screencasts with my audio recordings (which are done separately — I probably read each paragraph of the script 3 or 4 times) (The main advantage of reading it paragraph by paragraph is when you make a mistake reading it, you can re-record just that paragraph).

I used a stand-alone mic from a friend, and transferred sd-card files.

I have two monitors, so I set the rightmost one to be 1280×720 resolution, lower than it can be.
Camstudio has a “select screen” option so it will only record one screen. Zoomit didn’t handle multiple screen as gracefully — I ended up making my right monitor the default (bringing the taskbar along with it :'( ) because it would let me type, but not draw, if I activated it (hit ctrl-2) on the wrong screen.

you can make your youtube videos creative commons license by default:
http://www.youtube.com/yt/copyright/creative-commons.html
http://www.youtube.com/account_defaults
I went back and marked all my s*y videos cc, and set cc as default as well.
In addition, I just looked at cc licensing my images, and realized I’d set that as default a while back.
http://support.google.com/picasa/answer/94293?hl=en&

Relatively intuitive to use. I used option-w to insert gaps (for breathers), cmd-r to “retime” edit the length of clips, and to make the end of a video sustained, I did it hackisly by cutting (b for blade) the end of a video and then using cmd-r to stretch that to however long I wanted it. There’s also automatic audio enhancements — I used “background hum removal’ a lot, and I need to go back and auto-enhance audio for all of them (I spoke rather softly).

other shortcuts: < and > for moving items around, ctrl-= for increasing 1db audio level, alt-w for insert gap.
oh I also learned -12 dB is a pretty standard audio level (depends on if you expect your video to be on tinny computer speakers or on real audio equipment) and you never want audio to reach 0 dB (when speakers distory).

The draft version can be seen here:
http://www.youtube.com/watch?v=s61NB62eWDM
I need to figure out the purpose of this video so that I can add and intro and conclusion to it. Also, credits. I tried to keep most of the reused videos / pictures in-browser so I’m not directly re-using someone’s video; I wonder if using 6 seconds of the dancing hexapods video is acceptable? Unclear, but I decided in favor of making something rather than twiddling my thumbs worrying about things.