i emailed out to a few lists “selling” my sailboat for the cost of a poem. The sailboat found a happy new home with Alex H, a MITERS member & Hannah & their baby. I did get another poem though, by someone who enjoyed the prompt, and found it again in my inbox just now:

True voyages are never maiden nor the hands that helm them
Fearful of falling afoul of that form.
Sometimes joyful but always impure the sea is impervious,
Gently hugging the shores it meets,
Lying spread betwixt them and a comingled firmament,
Then mounting and roaring in the face of rocks and spitting gods
in the same unconcerned coupling that brought about the first cell’s split.

In a permanent embrace that stays true only to its indifference,
disrespected creed, code, race, gender are all ignored in favor of
the same militaristic contract known to voyagers across millennia
with its blue-black ink of clicks and luffs
as a pledge to the unknown,
possibly beautiful and possibly vile,
signed each day in whatever bodily issue
might be demanded as partial payment
with trembling hand lashed to the tiller if so bidden.

On pain of death all who greet the cold wind from the rail
with digits raised on both hands
in so doing leave innocence on the dock
and instead thereby pledge to sport this same death as needed
while waking and dreaming, on hand and on brow:
As her breed I will respect the intricacies of the sea. 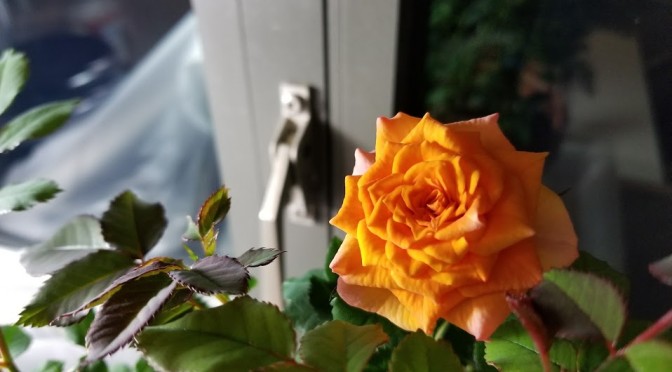 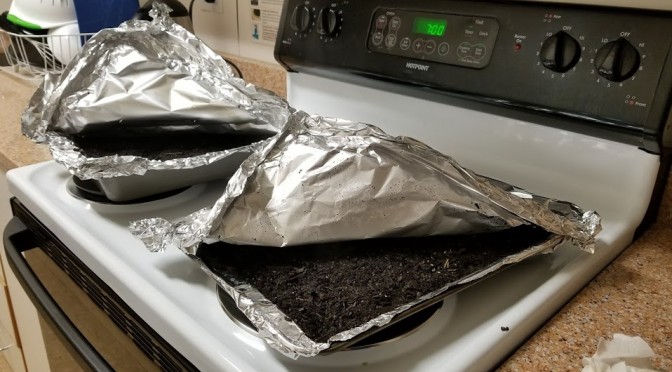 Recently I bought some potting soil from a hardware store. When I opened it, I discovered that there were small insects (perhaps fruit gnats?) in the soil. Since I was already having problems with spider mites (grr) on my indoor roses,

I decided to sterilize the soil.

It turns out to be very easy, although it requires a bit of patience. Essentially, you put the soil on a cookie tray (probably on aluminum foil). You moisten the soil (enough to be damp to the touch but not runny or squishy), then cover the tray with aluminum foil. As the soil heats, the steam from the water sterilizes the soil. When you open the aluminum foil (carefully away from you!), steam should come out. If it doesn’t, then the soil hasn’t been sterilized.

The internet say maybe 1.5 or 2 hours was enough, but I found that my oven always took something closer to 4 or 5 hours to steam the soil… :/ 180F I think is the max the internet recommends (something about releasing toxins at higher temperatures). It’s also possible to microwave the soil in a ziplock bag with the top open for 2 or 3 minutes, or alternatively in a tupperware with a few holes in the lid for 1 or 2 minutes. I think I will definitely try this next time — the oven took HOURS.