tl;dr “it’s like bird spotting but for bike tacos”

why do abandoned bikes get their rims all bent?

there is a lot of pseudoscience, rumors, speculation, passionate eyewitness accounts, and vague theories. take this forum thread: http://boards.straightdope.com/sdmb/showthread.php?t=606670

I notice the same thing a lot on College Campuses and assume its drunk college students limping home after the bars close and deciding to indulge in some low-grade vandalism. Presumably they don’t really need a vice to get it to bend like that though, I think they just brace the wheel against whatever the bikes chained to and then kick/jump on the edges

even some mechanical engineering insight

Reason I think it’s the snow is the bikes are usually parked a little away from the road. The weight of snow falling plus the weight of snow being pushed into them with plows== all bent up…

okay, so it _is_ plows, but not that plows are directly touching bikes, they’re pushing ice rocks into the bike? that’s the winner?

but then someone chimes in from Florida

Right, I imagine there’s lots of people kicking bikes or hitting them with cars in florida (people can’t drive in Miami. I’m serious. They’re insanely bad drivers. And this is coming from someone who considers himself a fairly bad driver). This is about why virtually _all_ of the bikes are suddenly completely destroyed after the snow melts. Semi-abandoned bikes that are just left at a pole for a month or so during the summer in Boston may have their wheels stolen (or just be totally stolen), but they don’t get destroyed like this.

As you can see, despite all these rumors go around, there is no actual science on the matter.

We must address this issue with scientific rigor if we want to prove that everyone in the world can be a citizen scientist. I suspect the state of the universal “bike taco” phenomenon may be similar to the “same symptom but vastly different underlying causes” scenario.

The solution is to create a crowdsourced science application. Just like you can participate in science  by reporting sighting of banded birds, or by putting a feeder up and counting birds,

You should be able to report on how, exactly, bikes are getting “taco’d”.

We must get to the heart of this matter. Our bikes are at stake.

to get academics interested, we will flag people who post reviews as either natives or tourist, and have automatic translation capabilities

you can read about the inspiration behind this startup here

Yelp may be great for reviews about restaurants, hair stylists or the nearest gas station. But if you find yourself in need of a public restroom, Flushd, a slickly designed app for iPhone and iPad, promises relief.

Flushd displays a list of public restrooms based on a user’s current location. The app uses data from Foursquare to identify the bathrooms.

It’s by no means the first of its kind, but Flushd has some promising features. People can offer up their own toilets for sharing by adding them to the list in the app. Features such as sorting—whether the bathroom has a changing table, for instance—are expected in the next version of the app, due in about three months.

“We want to make the bathroom experience better,” says James Edwards, creator of Flushd and CEO of Ahhh Media, the maker of the app. “Our goal is to offer an easy button for relief.”

What they don’t tell you in the press release: Flushd is a free app but if it gets popular, Ahhh Media plans to start charging and will donate a portion of the revenue to organizations working on sanitation issues.

NOOOOO I have been sniped. But now the market is open to the idea… I need merely make a better website than they did and reap their users… 😛 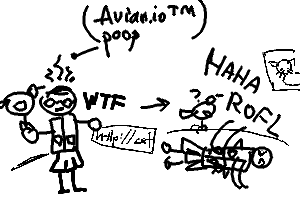 Recently I asked someone who shared a link with me where he found it. He told me “from the internet”.

Well, yes, almost all hyperlinks are found and shared on the internet as a matter of fact.

You extended the pigeon protocol to the concept of social media.

This Tuesday Terrible Startup Idea post brought to you by “it’s still Tuesday in Hawaii”.

Oh, check this out, someone was paid to write this article, and it wasn’t even April Fools: http://www.globalresearch.ca/circumventing-invasive-internet-surveillance-with-carrier-pigeons/5341180?print=1 They came up with a “coo-ing” Twitter-like startup name called Coo-ee , haha.