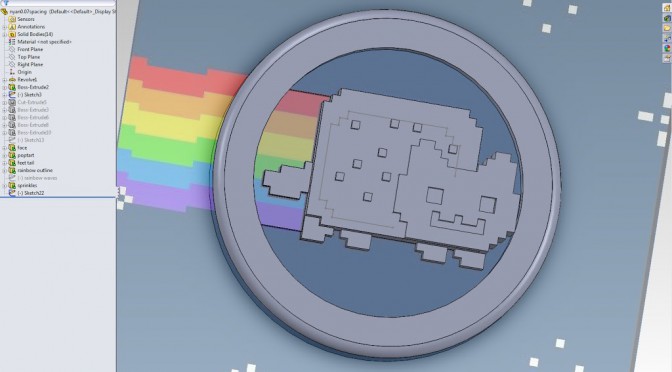 So a while back I was all like “I’mma mill me some nyancat for my 2.008 paperweight.” (http://www.orangenarwhals.com/?p=187)
Oh yea, my partner for this lab is the awesome Cappie Pomeroy. He did all the lathe work o.o so don’t ask me about that.
So I got around to milling it.

(The way I did it is I did a Tools>Sketch Tools>Sketch Picture, then resized that reference nyancat picture until it looked appropriate. I then put a Tools>Options>Grid>Major Grid 0.07 / minor grid off. System Snaps>check Grid. Also, make sure Units>IPS, InchPoundSomething. Then just trace it with lines).

However, my resizing and retracing ended up not mattering, since I decided to engrave it. This was because we had to make a 15 minute version, and no matter how I tweaked Mastercam (using 0.02” depth instead of 0.1”, using a wide endmill to clear it and then remachining with the 1/16”), there was no way the full 3D paperweight was milling out in 15 minutes.
See the X’d out paths to the left — I was tracing all the paths by hand, essentially. Then Pat, the shop instructor, came by and showed me the magic of the the “polygon” tool which will automatically apply a function (in this case, engraving) to everything within that polgyon. It created some weird paths, like you get on a lasercutter which doesn’t recognize your vector as one shape but as individual lines*, but it gets the job done. In other words, he finished in 10 minutes what was taking me hours to do… hah.
*aka it doesn’t trace them continuously but rather jumps back and forth between different lines in the drawing
See link below for g-code / mastercam / solidworks files.

The jig was made by the instructors for the class, along with the “offset” used in Mastercam to make sure the blank is positioned correctly.

Todo next: Mill out the actual thing.