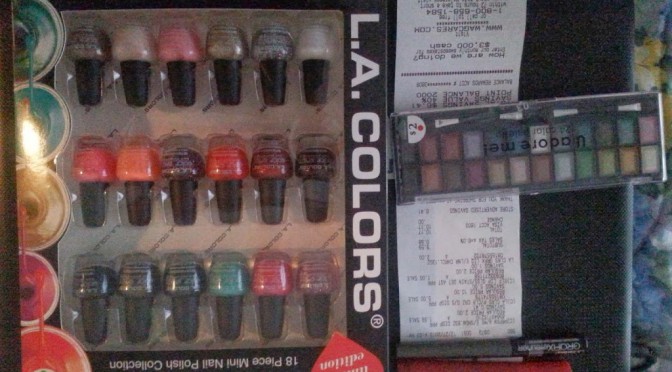 hot on the tail of “to be feminine or not to be” (which remains unresolved although people have been emailing me interesting thoughts) i would like to announce that after-christmas makeup gift kit sales are the best! they’ll probably also give me skin cancer in 10 years but whatever I’m only wearing them at home anyway.

target had E.L.F. makeup which was pretty cheap ($1 to $3 items for things that usually cost in the $10 range, e.g. mascara or eyeshadow). HOWEVER! at Walgreens 50% off (for the most things, it was a bit tricky) Christmas Sale I found $1 for 24 colors of eyeshadow and $5 for 18 colors of nail polish!

so great. all the nyan will soon be mine. mwahaha

after being home for a week i have also rapidly diminished the amount of time it takes me to apply eyeliner, and hopefully i will not be interested beyond the basics of makeup. so i think this phase of my life should be pretty short. maybe up-dos (hair) are next. MAYBE IN A YEAR I WILL LIKE SPORTS. ahhh fake identity crises are so much more fun than the real thing

anyway so i can spend 5 minutes and troll the world so great.

*EDIT: Actually I feel the need to more explicitly state my feelings on this matter. (A) I’m an engineer from MIT working on my own company. Really, whoever I date had better not think that my appearance is more important than my other characteristics. (B) The whole idea of doing things because they “appeal to guys” is just plain insulting to me. I put on makeup to have fun with identity and appearances — that is, I do things for myself, not out of subservience to some abstract male opinion of me. (C) It also sucks that society devalues being single, as if we are somehow broken or less happy if we decide to focus on work instead of relationships. My friends and I are not daunted by the prospect of never finding a partner, because we are happy by ourselves, and I think we are better off for it. END EDIT.

Although I must admit that when I had rainbow hair

(but was dressed in my normal no-makeup, free [male] tshirt, jeans) in Cambridge, MA, and MIT the only comments I ever got to my face were very positive (“your hair is awesome!” along those lines). so maybe the world is great so long as I don’t wear a skirt! WE’LL SEE system identification on the real world for the win. let’s give it some feminine input and see the output.

some day soon i will write a longer story about how awesome feminine people like Jordan and Maja and Judy broke the stereotype in my head that feminine = incompetent / ditzy. because they are some really fantastically competent people. and then i was like WHOA FASCINATING NEW WORLD and then here i am.

also people spend so much time on sports / games, why is spending time on makeup considered for “non-engineers”? yea, stop and think about that. the only plausible reason is because it’s associated with being feminine and therefore stereotypically inferior.

…i never thought i’d be a makeup person either.

😛 okay just kidding I have no idea what I’ll end up doing, probably whatever I feel like when I wake up the day we film. We might even design the course so that there’s no facetime and it’s all handwriting.