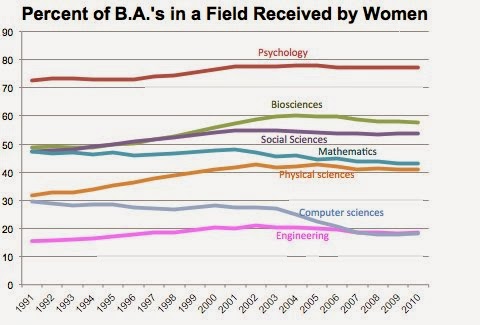 This is an email I sent out to poll my friends, but as it also serves as a useful summary of my recent readings, I will post it here in all its messed-up footnotes glory:
How much should i emphasize that I am female in my life if the goal is to have the most impact on female representation in STEM I can as one person?

But actually i would really appreciate thoughts or research or statistics on this.

If we accept the premise that stereotypes play a role in all this, [6]
in my mind there are two approaches to being a female entrepreneur:
1) be a diva (combat “1337 male hacker” with “1337 female hacker”)
2) be an everyday person (“all types can be female programmer”)
For 1), I look up to people like ladyada (on the cover of WIRED) and debbie sterling (goldieblox). When I talked to ladayada / ptorrone they said they explicitly grew the company so that ladyada (a) gets to do as much technical work as possible and (b) remains as the publicly visible front of the company. And it’s sort of nice in an aggressive way to be in-your-face feminine and competent, to try to break the link between feminine and competency. Also people have told me that female role models are very important.

For 2), there’s a reactionary sentiment against over-sensationalizing that you’re female [3] and  instead emphasizing being a human being [7], but I don’t know if this is just “be humble” “be quiet and skinny and take up less space.”  [5] In this case, I’ll should just be my normal not particularly feminine self.
In particular, I would appreciate help finding science about either of these approaches instead of just gut instincts / blog posts. I can’t seem to word my question appropriately for google scholar though.

To some extent it doesn’t matter immediately since i know which approach i prefer (#2) and it’s better to act than philosophize all the time, but I am struggling to find research that isn’t just a bunch of academics being confused as to why progress is stalled [1] [2] (maybe it is a reflection of conditions 10 years ago?). But in media production for the course, I can easily play up being feminine (nail polish, makeup, clothing) or not. I wouldn’t mind this at all, and it sort of plays out haphazardly right now depending on how I feel.

Footnotes
[1] ” Moreover, as we will elaborate further, we have noticed a sense of alarm concerning trend in science, technology, engineering, and mathematics (STEM) disciplines in general, and engineering in particular. It was possible in the recent past to point to gradual increases in the numbers of women in engineering and to define those increases as positive indicators. Any confidence that it was just a matter of time before gender equality in engineering would be achieved has, instead, been undermined by the reality that those increases have either slowed or stopped altogether.”
http://www.nxtbook.com/nxtbooks/swe/litreview2012/#/226 SWE 2012 compendium. I uploaded the relevant portion as a PDF here.

[2] “Women Gain in Some STEM Fields, but Not Computer Science”
“Computer science actually is more male-dominated today than it was two decades ago: Women received 29.6 percent of computer science B.A.’s in 1991, compared with 18.2 percent in 2010.” http://economix.blogs.nytimes.com/2013/11/15/women-gain-in-some-stem-fields-but-not-computer-science/ [3] ” I don’t see any solution other than time and perseverance.  Meanwhile I’m sick of writing about it; I’m bored silly with it.  So I’m going to cut to the chase, close my eyes, and pretend the problem is solved; we’ve made a great cultural leap forward and the whole issue is over with. And I’m going to write the profile of an impressive astronomer and not once mention that she’s a woman.”
http://www.lastwordonnothing.com/2013/01/17/5266/

[4] http://miters.mit.edu/blog/2012/11/02/what-is-a-miters-2/ or for more commentary, skim through http://orangenarwhals.blogspot.com/2013/12/my-reply-to-charless-on-200gokart-us.html
In response to whether people were intimidated by MITERS’s reputation or not sent to all MIT undergraduate dorms via email: [5] I also remember reading somewhere how this one programmer felt strongly that she was a “normal female” who left work at 5 and went out to shop for shoes and didn’t do hackathons during the weekends, and so she doesn’t really have role models she relates to. I also feel this way strongly due to my experience with MITERS where both M and F were “intimidated” by the hacker stereotype (although F more so statistically [4]).

Look at all these countries with >50% of science degrees going to females! (it sounds like the post-graduation opportunities are still lacking though) . To pass the test, an article about a female scientist must not mention: