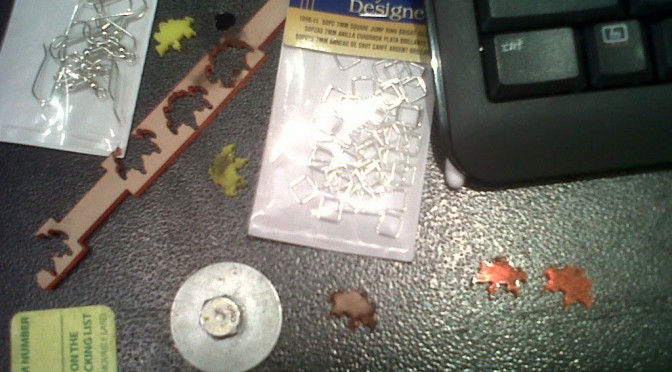 I added some lock washers and made them asymmetrical, because I miss the ones that +Hanna Lin made for me a while back that look like this, but prettier and more functional. Fatal flaw of acrylic jewelry: it only wants to face one direction, sideways, by default (I twisted it around to take this picture). Ah well. A puntly-hour’s worth of work. 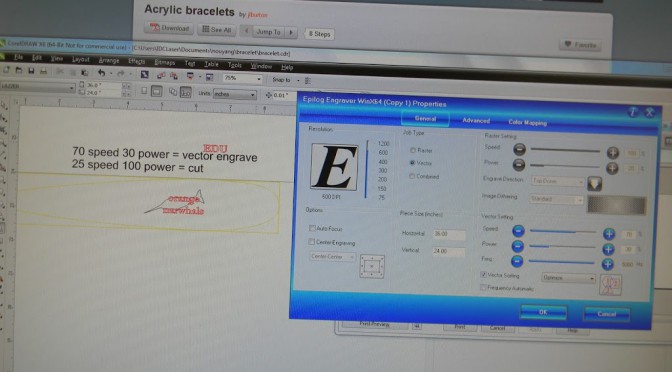 I woke up early one day and tested this instructables before class:
http://www.instructables.com/id/Acrylic-bracelets/

I was tempted to skip class and lasercut things, but I did not! (It’s an music theory 101 class, 21M.301, that I’m listening in on and am completely lost in at this point).

The first one I cut was about 8.5” x 2” and I made it in coreldraw. I wanted to put a hexapod in the middle but couldn’t find a png at the time.

The narwhal refused to cut as a vector so it’s not in the bracelet (I selected bracelet only). So actually the pointy tip snapped off when I was bending it. I made a too-tight radius so this actually helped allow the bracelet to be wearable because I can slip my wrist through the crack. The next time around, though, I made sure to start bending at the pointy end first. This step just requires patience, aim the heat gun, wait a minute, and then the acrylic should be super bendy, at which point I can move the gun up the acrylic and press down all the while to get a nice curve. And then having the patient to wait for it to cool while holding it in place.
I also learned to bend it on a clean surface as the hot acrylic picked up all the gunk on the mat. I was also too hasty in putting this on to check whether it would go on or not and ended up with a small burn. So… be careful. Hopefully this doesn’t scar like the forging-iron-chopsticks one (which is actually pretty faded from two years ago).
I did a second one which was closer to 9” long. This one retained the corner, but is also bent too tight. It is extremely hard to put on and actually took off skin. I didn’t know what to put so here is a cheery message: Ignore the black spraypaint, I was stenciling.

I finished up my lasercut birthday gift to cathy wu after two weeks -__-;;; with a lasercut card. She likes giraffes so I borrowed an image from the internet (see image below for source link).
Lasercutter settings for construction paper: 600dpi vector, 100 speed 5 power (120w epilog). about that awesome spray-on adhesive, yea fail, I used too much and then placed it incorrectly so had to redo I’m probably not entering, but they sent me free LED stuff to play with. I thought their theme was micro or nano or something so I was excited, because I thought they would send me something related to diy nano but I guess not.
Interesting box design (this came inside an actual shipping box): looks like they contracted out to a company that makes lasercut things, and that this is meant to be wall-hang-able: 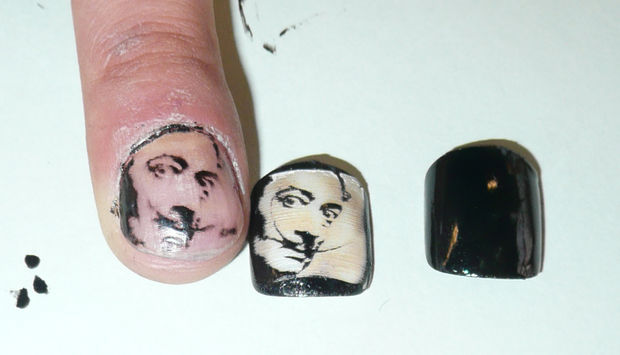 Hrm, so apparently it is important to make money. Also, it’s important to be happy! 🙂 Therefore I should investigate all the silly things on the internet.

Here are some notes to myself:
http://www.instructables.com/id/Thumbnail-portraits-Etch-an-epic-battle-between/?ALLSTEPS

But overall, it seems like a much better idea to not lasercut body parts directly 😛

Nyancat nails! Hattip to Jordan for sending me this via the facelols.

Fascinating, so it seems like there’s some paper which you deposit gunk on and then transfer it to your nails. Why does everything sound like 3d printing to me now?

Ah! It’s a stencil. Hrm. So the stencil can definitely be lasercut. The rubber stamp seems like it’d be easy to make as well.

Hrm, can do a lot with that. I bet I could tuck a small working hexapod into such a bracelet… *plots*