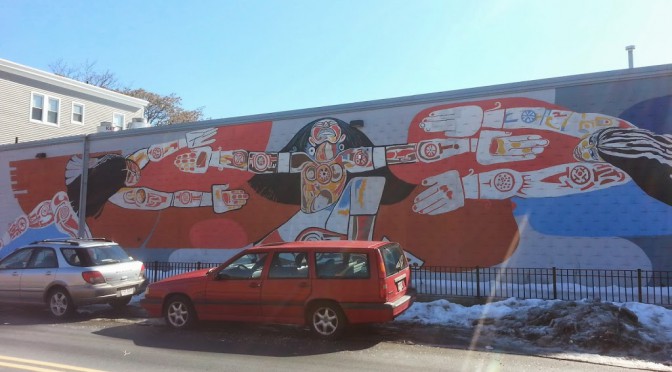 There were two days of 40s-50s temperatures a few weekends ago, so I decided to bike to the Arboretum and then the following day to Walden Pond. I left around 11:30 am and arrived at 12:45 am at the Arboretum, with earphones in one ear trailing to my cellphone GPS (kind of dangerous, but effective). Here is a mural I saw along the way which I’d never seen before. We went into Jamaica Plains for lunch. Along the way, we saw a take it – leave it – street library, which I found pretty cool. The next day I woke up at 2 pm and felt like going somewhere, since I didn’t have anything to do until 6 pm. After a bit of googling I settled on biking to Walden Pond. It felt ambitious but doable, but I would have to leave almost immediately to get there before sunset. After biking on some highway for a bit, I reached the start of the MinuteMan bike bath. This path (pictured above) was very nice and flat but wet / slushy / icy in many parts despite a day and a half of nice weather. Good thing someone told me to wear rain boots, to bring extra socks, and not to expect to go fast! I left at 3pm, bought some snacks and gatorade, and headed out by myself. Too impromptu to find anyone to go with me. There was a large section after the bike path just on the side of the road, which actually meant on the road because if you biked on the side of the road you ended up in the mud / giant puddles. Good thing I was wearing rain boots! 5:12 After walking up 3 or 4 hills and then biking some more, I arrive at the Walden Pond State Reservation, which isn’t actually where Walden Pond is. Walden Pond is across the street. The pond was frozen over and still covered and snow, while the sun was setting by this point. Only two other people were there. It was really nice and tranquil, disturbed only by the sound of me noisily munching on food rawr delicious fluids and trail bars. Well, after a few minutes, I headed back out, since it was getting dark. I failed at getting directions to the closest commuter rail (commuter rail, because biking back in dark icy conditions on the side of roads without bike lanes sounded like a terrible idea) beforehand, figuring I’d rely on GPS and that I should get on the road ASAP to get there before dark. Lo and behold, when I tried to go back, not enough 4G signal for usable GPS. fail. And then I on top of that I got a flat (and I definitely did not have a spare tire or pump). Luckily some really nice strangers who came out of the state reservation wearing snowshoes had a car nearby which could haul me and my bike to the commuter rail station. $8.00 for a ticket back, and $6 (I think?) for a replacement inner tube. Ah well. So it goes. I also had issues on my bike with the shifter chain falling out (I have an three speed internal gear hub) when I replaced the inner tube, but that’s a tale for another time.

I didn’t even feel too tired at the end of my 15 mile trip. Bikes are great!