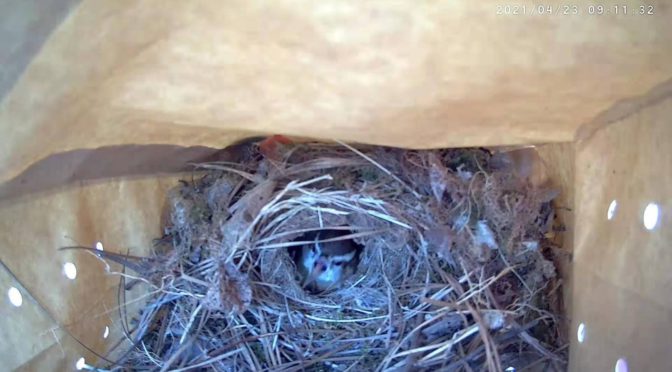 that last post was way too depressing to be my most recent post, mostly because i posted a side project of mine to reddit where i use this same (old) username, so i’ll post some birds here instead

in other bird news, there has been a sharp decline in birds at my feeders. literally went from 10-15 bird visits a day to 0-1. i used to have fill up my feeders up every two days, now it’s been 5 days and it’s still fill to the brim. i wonder if the ground warmed up and they’re all eating larvae now? they’re all sitting on eggs instead of courting? i used to have a possibly-couple pair of house wrenches literally sit on the feeder for 10-15 minutes just having a buffet o__o didn’t realize i’d miss them.

at least i still have these little baby birds to look forward to each day! although since they are there all day, i no longer have the incentive to wake up by 8am every day anymore.

also we have a mushroom kit growing with some ferocity

also have some sprouts planted, we re-filled the raised bed. 50-50 garden soil and top soil.

so i’m not sure exactly why i keep accumulating accounts and (user)name. i think part of it is some sort of FU to all the companies and industries who keep collecting data, it’s like well at the least i’ll make it so you have to employ data scientists to have to munge my accounts together lol. the other part is complicated but eh so’s the rest of life, otherwise it’d be boring right?

other cool finds of the day:

oh yea the links came from this talk which was p. good too… there’s the main topic of the talk but also things I never thought about: replacing calculus with linear algebra as the intro university math class !

the cause of this “maybe i’ll clean up my blog homepage” is that i helped write a puzzlehunt which accidentally found a lot of signups (i feel bad to have dragged my fellow puzzlewriters in, but in my defense, there are zero comments on most of the posts to that subreddit, and the puzzlehunt calendar is super plain and unassuming also… I thought max ten extra signups of which 5 might show up…)

so if you’re into puzzles (which have been taking up more of my time lately than my MITERS-quality projects??? since when did this become a significant side hobby???)